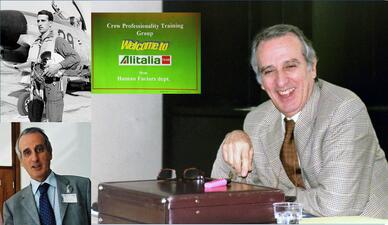 It is with deep regret and much sadness that we inform you that Marcello Ralli passed away on Monday, 10th February, at the age of 86 in Rome, Italy.

Marcello joined EAAP in 1991 and was a loyal and very active full member since. He supported EAAP activities with much enthusiasm and he was the lead organizer of the EAAP 1996 Conference in Sabaudia (Rome) This was held as the first Aviation Psychology course, one of the requirements in the EAAP Accreditation Scheme that had just started. Marcello was also an enthusiastic member of the EAAP Crew Professionality Training (CPT), a group that assisted JAA in preparing and updating the CRM training requirements for JAR/FCL.

Marcello was both a professional Pilot and a Psychologist. He gained his PhD in Experimental Psychology in 1984 from the University 'la Sapienza' in Rome.

As a pilot he joined the Italian Air Force in 1956. He flew the F-84 Thunderstreak and the F-86k Sabre and flying intensively during the so called Cold War, reaching the rank of Captain. On leaving IAF in 1962, he joined Alitalia and flew most of the aircraft types in Alitalia's fleet at that time, from the Vickers Viscount to SE 210 Caravelle, DC9/30, B727, DC8/43, DC8/62 and finally the B747.

During his career he became Captain in 1967 and later Instructor, Examiner and Chief Pilot. He contributed greatly by introducing the Human Factors and CRM training in Alitalia during the mid '80's and continued his involvement becoming head of the HF Department until his retirement in 1993.

After his retirement from Alitalia, he started 'Ralli Associates', that had significant success providing many customers with HF training for flying and maintenance personnel. With his wife, Elena Mongini, also an aviation psychologist, and two other co-authors he wrote the book "Fattore Umano e Operazioni di Volo" (Libreria all'Orologio, 1993) the first on that subject written in Italian. In fact he had started in his early years and continued throughout his life to contribute to many aviation publications, being a competent writer on many aspects of the subject and a talented artistic illustrator.

Marcello was a very sensible person and certainly a great aviator and HF-man. He educated many professionals on how to avoid troubles or manage them making the best of Human Factors concepts and skills.

On 11.02.2020 a ceremony was held for Marcello in Rome, in the church of Santa Maria di Loreto, the Patron of all the aviators.

Our deepest sympathy and sincere condolences go out to his daughter Simona.

May Marcello rest in peace, he will be missed by many.